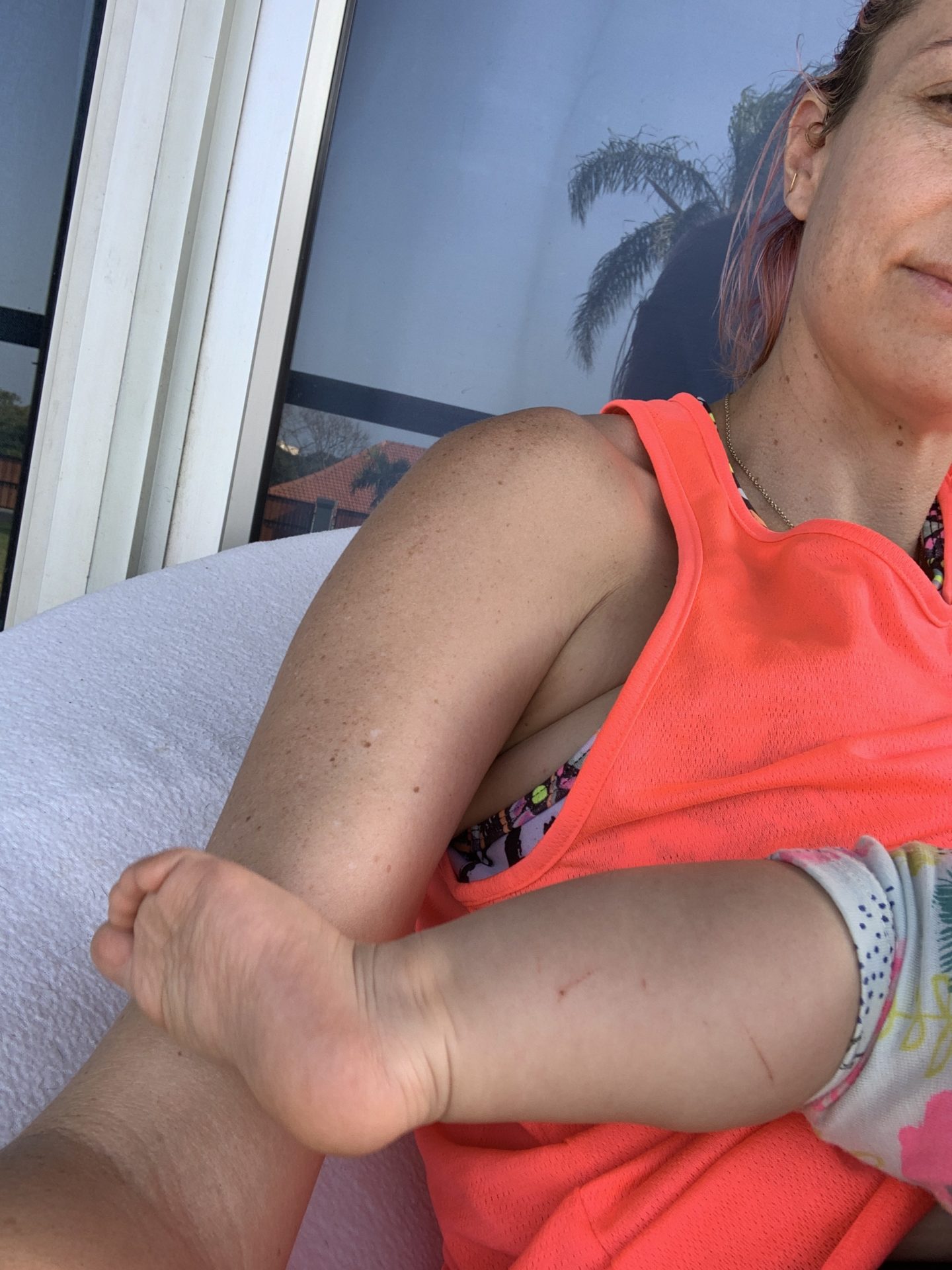 Thats what I thought when I was pregnant and everyone kept asking me if I was going to breastfeed. Can we just talk about how invasive that is as a question? I had literal strangers asking me, and even when it was people I knew I still felt like it was so odd to ask. Unless you are offering to lend a bottle warmer or something, then it’s not really a question to ask someone.

I kept answering the same way: I don’t know. Because I didn’t. For one thing, how do you know your body will even allow it? For another, I found it to be the most Unnatural natural thing!

I already knew that if I DID do it, that I would never be a person to feed in public, it just wasn’t my vibe. That I knew for sure! So I didn’t plan, I dodged the questions and I just kind of stayed in my usual denial with pregnancy and carried on.

For someone who didn’t know if they wanted to, here I am 11 months and still strong! I am not trying to make it to a year and I will either way, because I have enough of a freezer stash to get her there. I did that so that if I (God forbid) got sick and had to be away from her, that she would have enough for a few weeks. I am SO glad that I did that. That was the one good thing about lockdown, I was expressing to freeze and not to take out for a coffee date like usual.

So I didn’t know if I was going to breastfeed or not. It just sounded so unnatural to me and in my mind it was just weird. Maybe it was also the thought of me being the only one who could do it, so there would be too much attachment and that put me off on a subconscious level? Who knows, but the thoughts were there.

A friend had the bottle maker when I visited her in Scotland two years ago, so I was sold on that. The perfect formula bottle in 2 minutes?? Sign me up! So I ordered one when it was on special online, so I was super prepared.

Then I decided, not to put pressure on myself, and if it happens, it happens. But you hear so many horror stories about the pain, and you should prep yourself using a loofah and and and. Well maybe that was what put me off?! So I decided I would just try the first week because that’s meant to be the most important part with the colostrum for the baby. Liquid Gold! So that’s what I did. I needed a shield for the one side and so those came on the second day. They didn’t really stress the timing of it so they weren’t brought to me quickly, but we’re all clueless at this point and trying to navigate the first two days! The first day and night is such a shock to your system! You’re still recovering and then trying to get it right and it really isn’t as easy as it looks!! Especially with this tiny little thing that you’re scared to hurt or smother. It really is a massive learning curve.

The first night they topped her up with 20ml of formula because they were worried her blood sugar levels would drop. I wasn’t going to argue, I have no experience in this so I don’t want to question someone who has been doing it for years. Whatever you need to do for her! The second day went a bit better, and the third. It really takes time to find your groove. The shields are such a hack and so inconvenient. I think that really put me off, but hearing my friends complain about the pain they were having, I was kind of glad for the protection at that stage! After a week I was doing ok, but then you get the pain, the cracks, that came in after about two or three weeks, I can’t remember the exact week now since it was all a blur. But you use allll of the Lanolin cream and I was lucky enough to have my friend Lulu Physio nearby and she rents our mini lasers! So I used those and OMG do they help! In a week I was so much better and ready to keep going.

I think it’s been ok because I never had any expectations on myself. I just went with the flow. When you are a adamant about your birth, your feeding, your parenting etc etc and you set up expectations, you are setting yourself up for disappointment. So I did the opposite of that and it worked.

Once I was told that the first 7 weeks are the most sore, but its easier after that, my mind was right and I pushed through the pain. It was true! After those 7 weeks it was much less painful and you find your groove. I did feel anxious though. Maybe it was more the hormones and loneliness of it all. I felt like I was always “stuck” under her in the chair, in the room, alone. So it got lonely a lot of the time and that with the lack of sleep, makes you quiet anxious and emotional. It is such a mind *beep*. You are so grateful and so in love, but you also just don’t want to be so needed 24hrs a day. But you carry on. She stayed small for ages and we had to start topping her up with a formula bottle a night to get her weight up. You do kind of feel like a failure in the beginning because your milk isn’t filling her up enough, but once you get over that and realise someone else can give her a bottle, and that it is for her best interest, then you get over that!

At around 7 months old she kept pulling the shield off! It was hilarious. I was like giiiirl, that’s not going to work for you. The joke was on me because she latched without it and she hasn’t used them since! What a relief, making my life so much easier and more streamlined. No more washing and sterilising twice a day and remembering to pack them, and taking ages to pop her on. It was like a whole new world 😂 So if you use shields, just know that one day they might be strong enough to stop using them and your life will change.

Apparently the percentage of moms breastfeeding up to one year isn’t very high worldwide. Lulu told me a stat a while ago but I can’t remember right now. So part of me wanted to get to a year to better that stat for myself. So this is me pinning my imaginary medal to my chest!

It’s so strange, because I don’t think its gross anymore. Obviously or I wouldn’t have done it for so long. It just becomes normal. I have fed her once in public. At the airport! The flight was delayed and I wouldn’t have enough besides the two prepped bottles for take off and landing, so I put that giant cape on and I did it and it was weird. But she was cranky on the plane so guess what? I had to feed her again! That was less weird but still not my favourite. At least I know I could do it if I needed to and that makes the difference.

Now that she’s eating solids and feeding less, I strangely miss it! I know, I was shocked too. Maybe it’s the quiet time together, or that it is just you and your baby and this special thing you have. This would be the same if you express and formula feed of course, not trying to trigger anyone here, but that’s just my feeling of the moments I’m missing with her now. So from someone who thought it was gross and the weirdest thing ever and I didn’t want to do it, I have become the one that feeds her in the garden and under her teepee.

Keep going mama! You’ve got this!